Batam is an island often picked for its laid-back pace, and a spot to enjoy the power of Singaporean currency translated into massages, seafood and those buttery kueh lapis. It’s not exactly known for a lot of culture, but that can occasionally change.

With more than 100 million in Indonesia coming from the Javanese ethnic group, their influence can be seen at many of the country’s tourist spots. But in Batam, an annual congregation happens that not many know of, and this year, the Batam Javanese Community Festival celebrated their 10th anniversary with an immense outing. 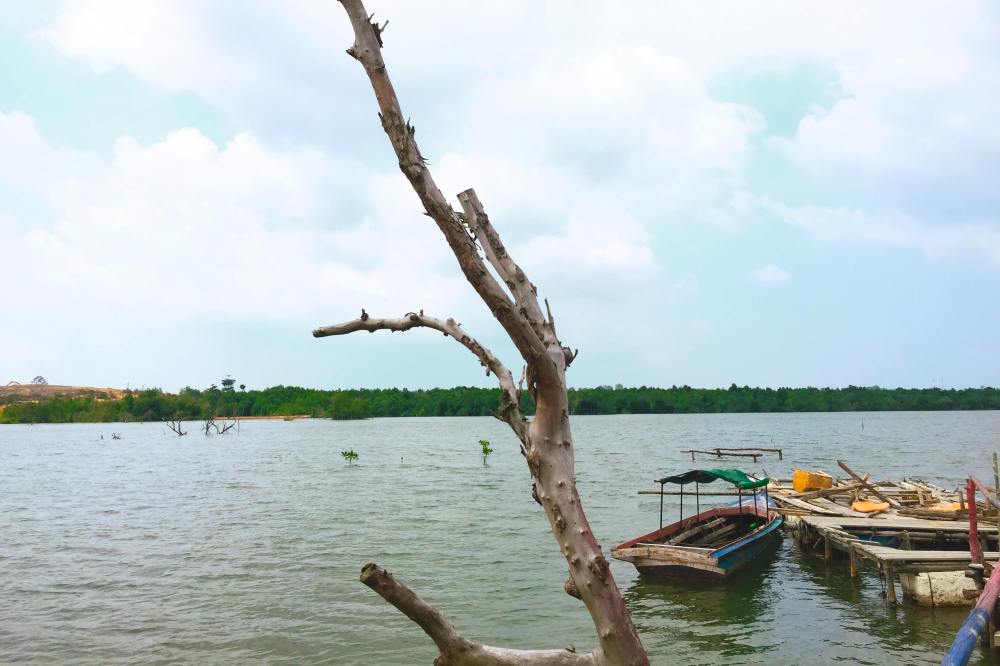 To ease us into the celebrations, our guide Edi prepared an itinerary to update ourselves with some of Batam’s sights. 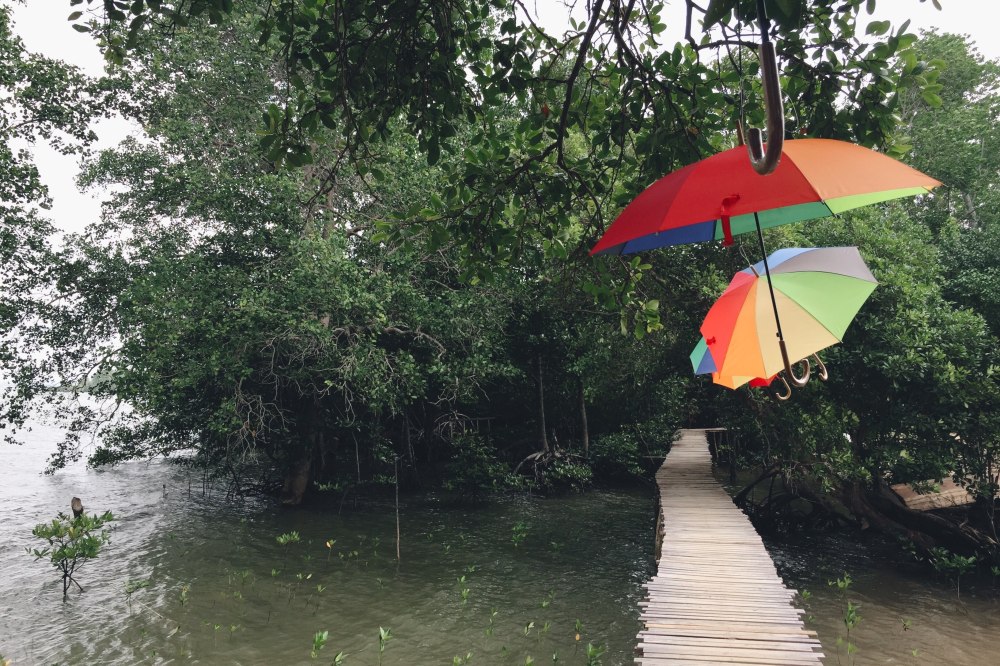 Several local groups, realising the potential of tourism, have come together to dress up their mangrove patches around Batam. This includes throwing in plenty of colour with rainbow umbrellas and vibrant coloured signages, no doubt in a bid to draw the Instagram crowd.

The many walkways, cobbled together with local wood and some local experts, is inviting for someone like me, but those in heels and erm, are of some heft, might need to be wary of certain older boards or sections.

But there’s plenty of creativity here – rope hammocks floating in mid-air, a small tower outpost, and pavilion spots to rest the explorer’s feet. A pity about some of the floating trash though. If cleaned up, places like the Pantai Terih can be extra charming.

A Malay House Museum, a modern beach, and some scenic seafood

About 20 minutes away, Limas Potong stands as an example of a traditional Malay house in Batam. Raised on stilts and managed by a local, you can see the structure and decorative features, including a mannequin replica of a wedding.

Peering out of the windows, one can easily feel the timelessness of this area, unchanged by modernity.

On the other end of the spectrum, Nuvasa Bay is an updated beach with swaying palms and modern amenities. Many families were enjoying the various water sport options, sold at the ticket counters, and the crowd was a vibrant mix of young and old.

We had a sumptuous lunch at Barelang Seafood Restaurant, where the delicious meal was accompanied by a generous view of the nearby suspension bridge. This was possible because the restaurant is a structure built out into the waters, with huge sections laid out with tables for diners to eat in comfort.

When refugees were treated better, and some coinciding festivities

Not many know of the massive encampment built for Vietnamese refugees in the 1979. This place saw over 250,000 people pass through, escaping from the Sino-Vietnamese war. It was not only a space for them to live, but included schools, medical spaces and various religious venues for them to lead a decent lifestyle. It was heartening to see the world rallying to support these refugees, though equally disappointing to see that we have regressed in our attitudes towards them. 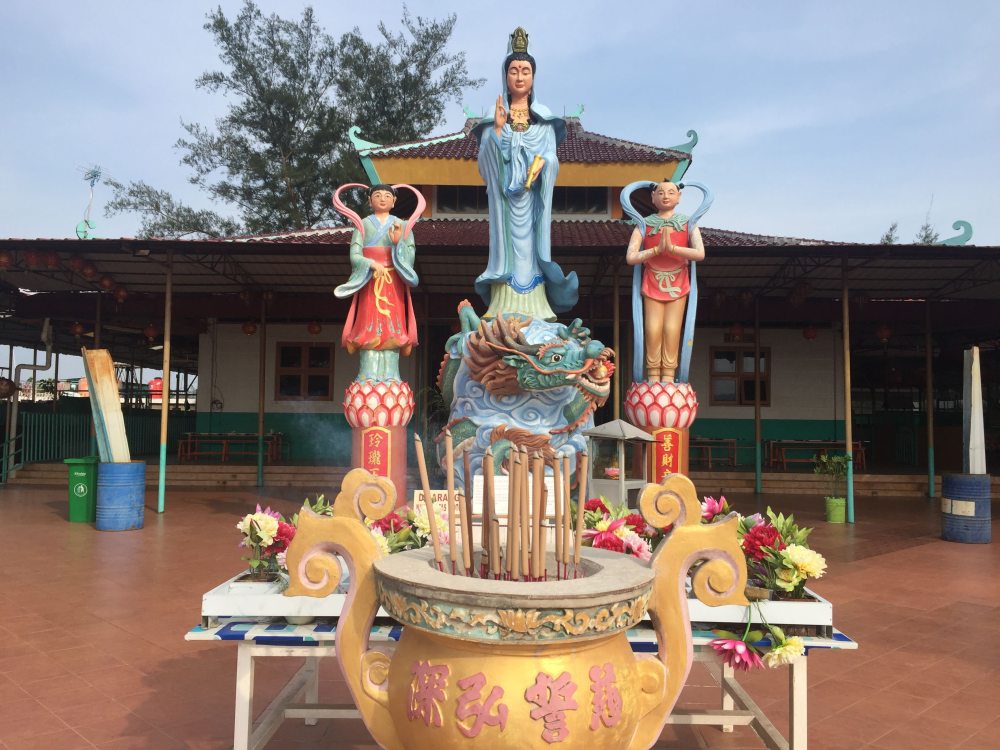 One of the few remnants that still operated, was the chinese Kwan Yin temple. It was not only well-kept, but gave us a sweeping view of the beautiful area around it as well.

The Vietnam Camp was the furthest of the sights, and so after more than an hour’s drive back, we sought some rest at our hotel before tucking into some great Sundanese cuisine at Saung Sunda Sawargi Restaurant Barelang Seafood Restaurant.

We popped out quickly to another event that was held during this period – Pesta Bola & Bazar Kulinar – a night food bazaar with some stage performances and football theme activities (no doubt a nod to the coinciding World Cup).

The closed streets made it an easy and relaxing walk around the market, and those with night munchies can more than satisfy their supper cravings here.

Before the main event

To better understand the whole festival, who better to speak to but ex-governer and Leader of the Javanese, Punggowo Dr. HM Soerya Respationo.

The statuesque man explained how his people have self-funded the events, making it a true community display. And the support comes through in the numbers too. Over 150,000 people attended the event last year, and Respationo is aiming for a lucky 162,000 this time round.

The throngs at the festival were promising. Droves of people wandered around the huge compound near to Batam Centre port. Over 50 types of Javanese food usually not found outside of their home areas are sold at the many tents. The gourmet stretch in the middle was easily the most crowded. 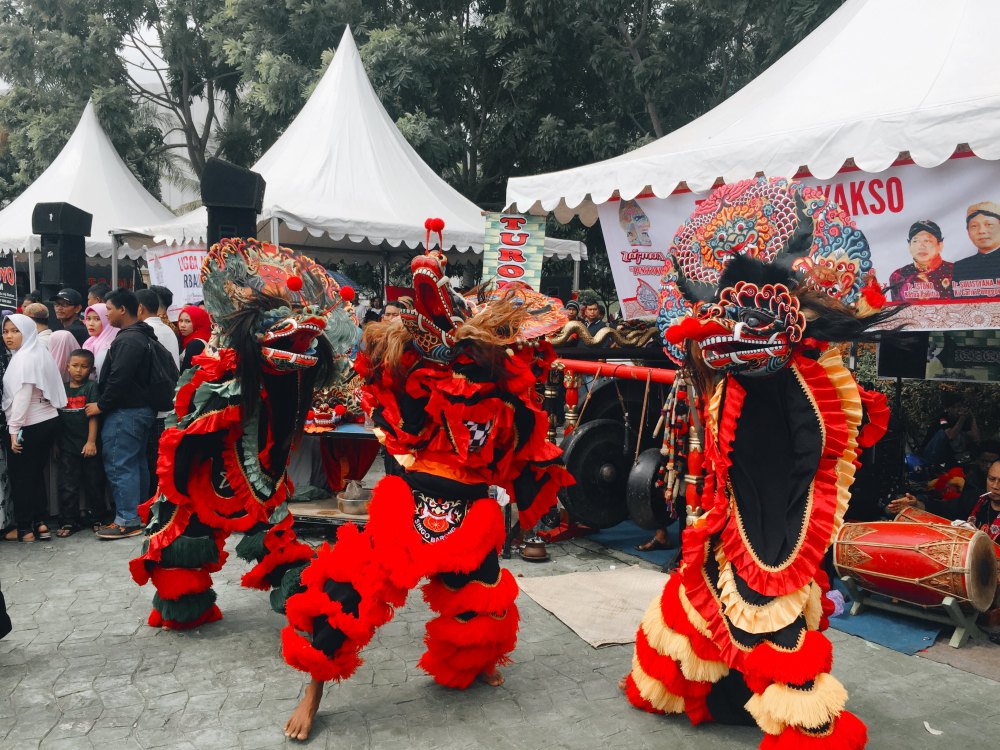 But most riveting of all for me, were the tents at the perimeters. Various groups from around Indonesia come together to demonstrate their version of Tari Perang Prabu Singo Barong (Prabu Singo Barang War Dance). This raw energetic dance is fiery stuff.

Note: Some images below might be a little disturbing to the sensitive. 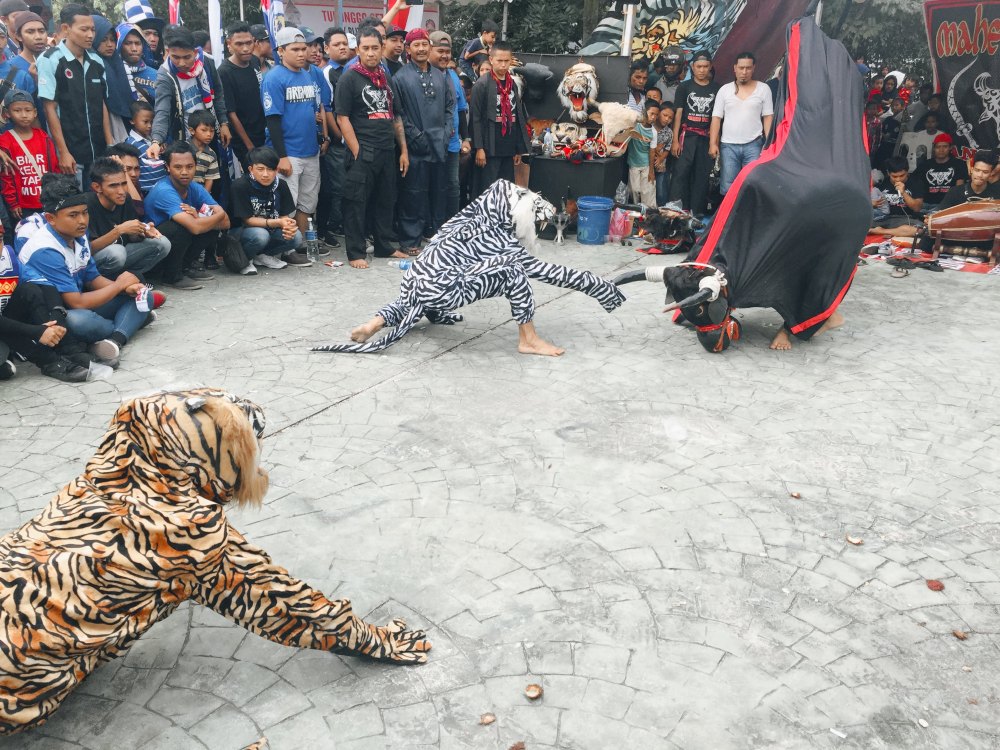 I can only best describe it as a very aggressive form of costumed dance, featuring men togged up in various outfits to tell different folklores, usually involving some combat. There was a also a very spiritual twist – most of these performers are said to be in trance while they performed. 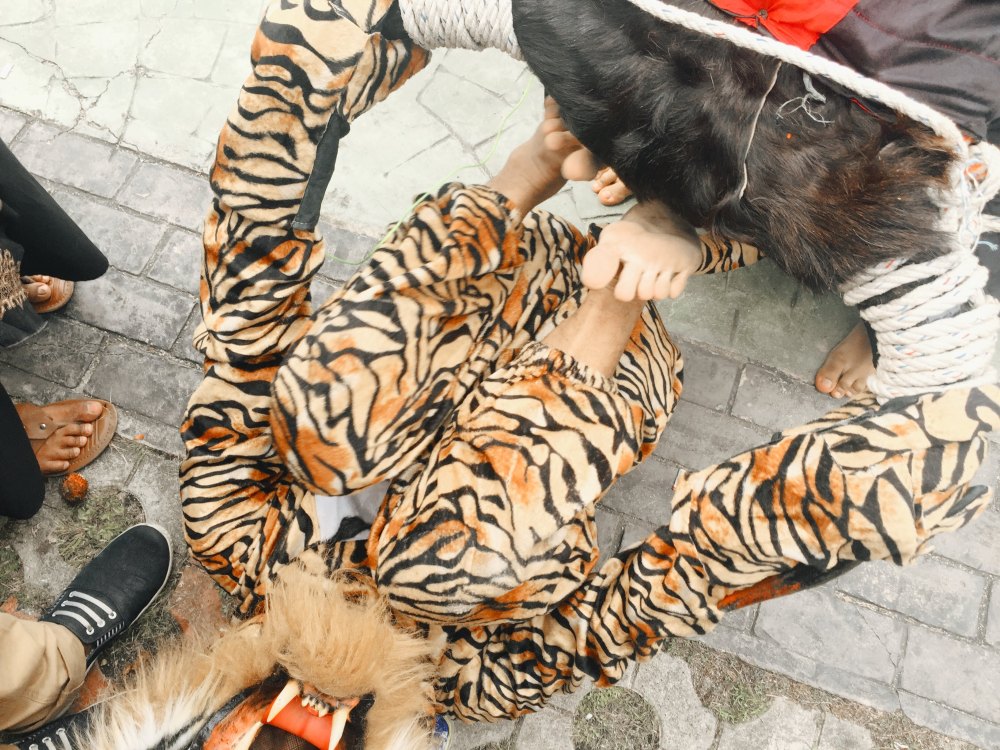 This was most evident in the first group, who had a man cracking a whip constantly in the air while managing three colourful entities. Initially I had thought that he was subduing them, but it turns out the whip was cracked to energise them.

As the dance wore on, one of the instrumentalists went into a stiff catatonic state. Some others around him picked him up in his frozen position, while using oils and gestures to call him back.

He did come around, but not long after, a guy at the side collapsed growling and struggling. This clearly unnerved some of the Muslim bloggers who came from KL.

Needless to saw, this primal form of ritual is probably shocking to some. But I enjoyed the uncensored display of the Javanese culture in a festival setting like this.

Some other acts that wasn’t for the squeamish, included men performing stunts to show their invincibility – like rolling over broken glass, or having a man stand on top of another lying back on a board of nails. 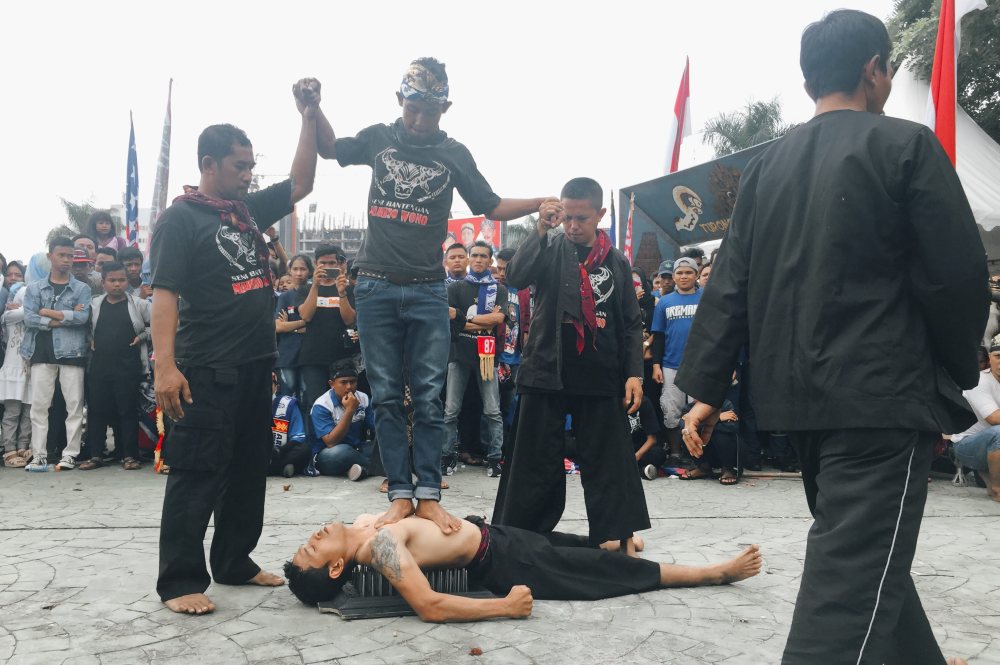 All of this left an indelible memory during this visit, including a really unexpected moment where I ended up on the shoulders of the bull performer. One moment I was just taking a photo and told to rest my hand on the bull, the next…

Trust me, I was sheepish as hell when they held me aloft, even though the spectators thoroughly enjoyed it and applauded. 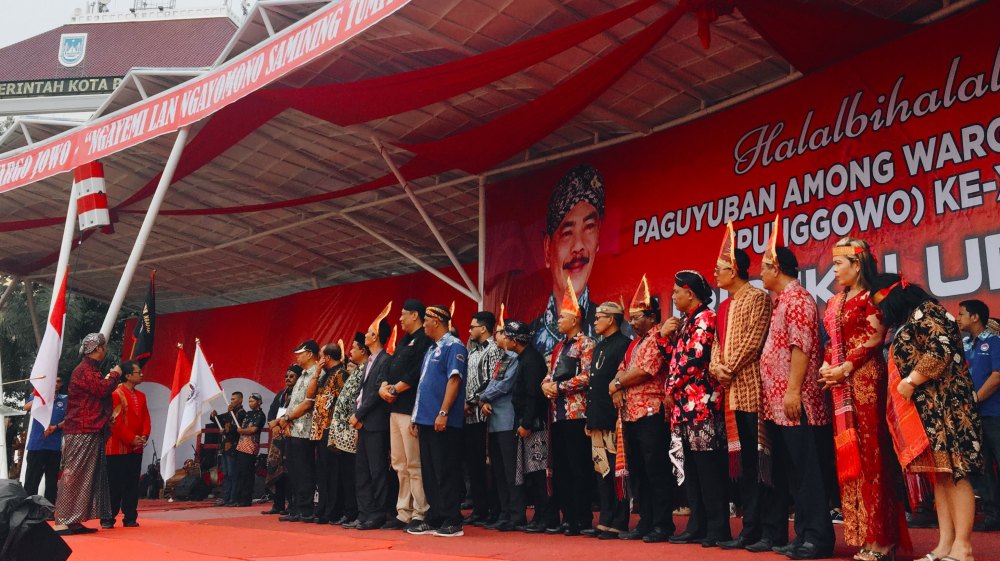 At the main stage, the administrative ceremonies were dealt with as the audience looked on. No doubt a lot probably stayed for the performances, such as the spectacular Reog featuring giant headdresses, but also the lure of winning one of the motorcycles and the grand prize of a car no doubt.

The Javanese Festival may feel very specifically-targeted, but my browsing was met with a lot of friendly engagement and sharing. For anyone interested to experience an authentic dose of Javanese culture, this festival will surely serve to perk.

Here’s a special snippet of the dance: