It was a great pleasure to join other experienced bloggers in sharing our traveling tips for Season 2 of Sony Picture’s Better Late than Never.

The comedy hit series is back for the second run, as Henry Winkler, William Shatner, George Foreman, Terry Bradshaw and comedian Jeff Dye, extend their travels to Munich, Berlin, Lithuania, Sweden, Barcelona, Madrid and Morocco. Not satisfied with just cruises and resorts, they ham it up to not only for the cameras, but to also get their chance to experience the YOLO so many people (often younger) talk about.

Better Late Than Never 2 premiered on 20th April, and the second episode will air tonight, Friday, 27th April at 8.55pm on  Sony Channel.

With the holidays coming up real soon, Sony Channel has put together a nifty list of travel tips from top travel bloggers in Asia.

Fear sticking out like a sore thumb? Try blending in with the locals by dressing like them.

Cerita Febrian agrees, “when I visited India, I wore a lot of their traditional clothes and the locals seemed to appreciate my effort. It looks really beautiful when you’re taking photos because you can blend in with your surroundings.”

Be open to new experiences

When the five celebrity adventurers set out on this trip, they certainly weren’t expecting to dress up as Vikings or learn how to yodel in the Bavarian Alps. But great memories are made from trying something new.

A Girl and A Bald Traveller shares that on their first trip to Morocco, they paid the cost of a five-star hotel for a camp stay. “It was expensive but the experience of being wrapped up in warm blankets, and drifting off to sleep under a sky filled with stars was something no hotel could ever replicate.”

Travel should not just be about simply sightseeing to take selfies or souvenir photos at landmarks. “The best experiences come from trying out different activities and mingling with locals,” said Travel Up. 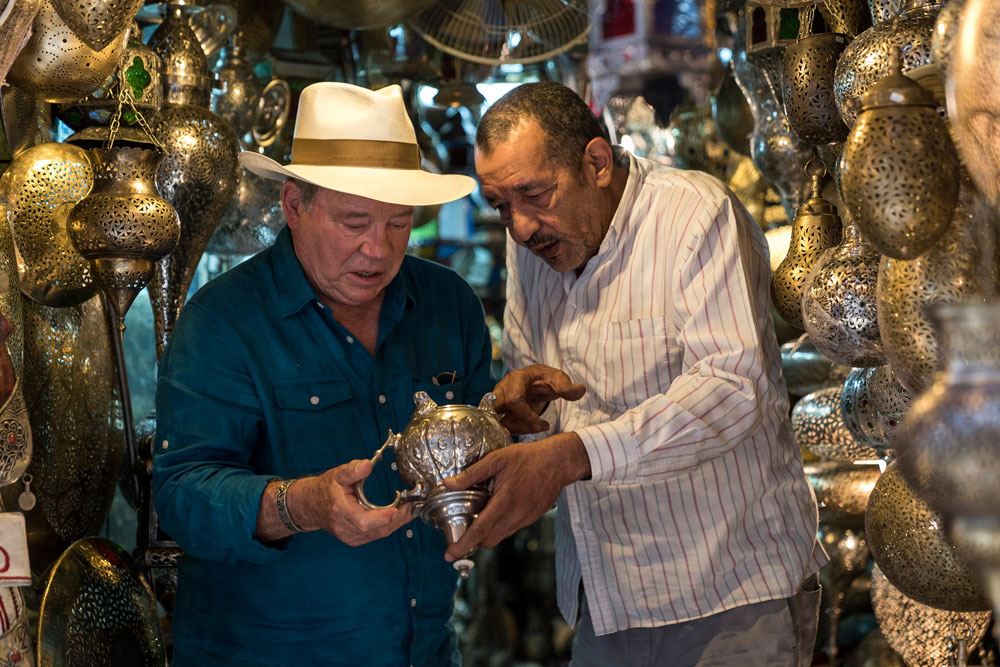 It’s easy to get mesmerized by the sights and sounds of a shopping street. As the five guys get lost in a Marrakesh bazaar in Morocco, what are some tips to keep in mind so that you don’t overpay for your shopping?

“Always haggle with smile,” said Travel Inspiration 360, “that could make a difference between paying a higher price and getting a bargain.”

Travel Chameleon suggests learning basic phases in local language before heading off. “One important I learned when it comes to bargaining is to pick up a few important words in the local language. If you talk like a tourist, you will be charged a tourist price. Before I visit any country, I would learn key phrases such as ‘how much is this?’ or ‘can this is cheaper?’ to break the ice with the seller,” he said.

Over the span of eight episodes in this season of Better Late Than Never, the five celebrities will embark on unique culinary adventures that are full of surprises. Food, after all, is a huge factor when it comes to travelling.

“We all know to try local food and we cull our list from suggestions. But look at the tables around you at your next restaurant overseas and see what the locals are really eating. Usually if you ask nicely, they will be happy to share their recommendations!” advised Morgan Awyong.

Passport and Plates has just one philosophy when it comes to food, “one of my favorite things to do is to ‘eat it first, ask questions later.’ In Bangkok, I purchased an assortment of street food and posted photos of my finds on social media, inquiring what they were. It was definitely an adventurous way to try some of Bangkok’s street food!”

Speaking of being adventurous when it comes to food, I Wandered highly recommended horse milk if you ever visit Mongolia, “it is quite unlike any other kind of milk you’ve ever tasted!” he said. 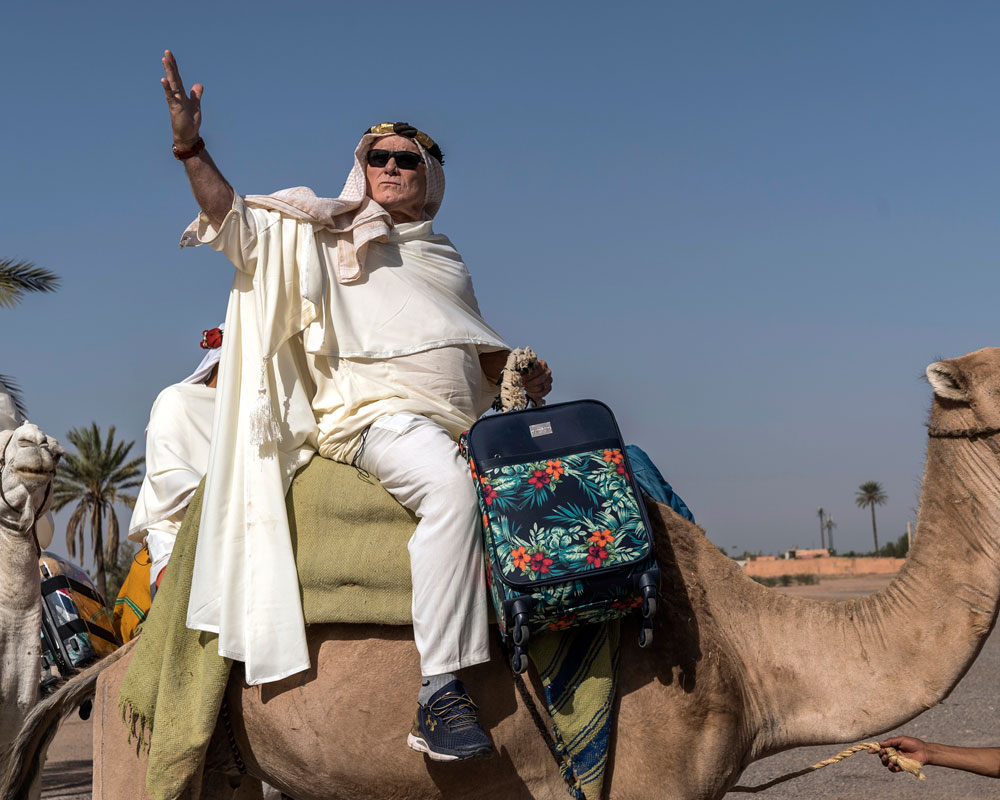 A brand-new city might get too overwhelming at times but there are so many ways you can explore the city – from taking organized tours to hiring a local guide. Henry Winkler, William Shatner, George Foreman and Terry Bradshaw are lucky enough to have sidekick/tour guide Jeff Dye to show them around the cities.

“My favourite means of exploration is travelling on a bicycle and exploring on my own. It’s usually a cheaper and more convenient form of transport, you can stop wherever you want, and experience a different side of a destination beyond the usual tour, “ said Travel Up.

A word of caution is in order. Terry Winkler gets very, very naked in this season of Better Late Than Never. But that’s not what we mean by traveling light.

Travel Up advises travelers to reduce their luggage while travelling, “As much as possible, I try to carry only a backpack when I travel instead of a suitcase so that it’s easier and faster to get in and out of the airport, or carry while in transit. Since I usually rent a motorcycle when I get to a destination, travelling light makes it easier to get around.”

When it comes to the unexpected, Cerita Febrian only has one pragmatic tip. “Be ready for everything and be adaptable, because you will experience a lot of unexpected things when you travel!”

Don’t sweat the small stuff! Always remember that you’re on a vacation and sometimes it’s ok to just…relax.

Morgan Awyong is all about taking it slow when he travels. “Slow travel is the best kind of travel for me. Like staring at a 3D illusion drawing, the real spirit of a place comes out when you look at it long enough. When you’re not rushing from point A to B, you find yourself noticing all the other interesting nuances in-between and that makes a whole lot of difference to your connection with a country.”

I Wandered recommends Bhutan as his choice of vacation. “While most people would choose to go to a beach resort, I found no other destination as relaxing as Bhutan. The country’s unmatched serenity and the spirituality of the locals are sure to put your body and soul at ease,” he said.

Be ready for the unexpected

William Shatner had no idea what to expect for this season. He had no idea that they would be judging a traditional goat beauty pageant or perform an ABBA number in front of an audience.

A Girl and a Bald Traveller advises travelers to be aware of their surroundings. “We actually got duped by a makeshift immigration outpost. The officers collected US$100 from as payment for visa, but they refunded that amount after we insisted that we didn’t require visas. Only until we arrived at the real border outpost then we realized that the US$100 note they returned to us was fake!”

“We still hold on to that counterfeit US$100 bill as a souvenir.”