The film gets one thing right – the sets. Otherwise, Hell Fest is really Halloween (including a very Michael Myers killer) without the gumption, impact or style.

Horror films are not known for character development. But Hell Fest tests the boundaries of how much they can take with a crew of horror-film cliches. There’s the central nice couple Natalie (Amy Forsyth) and Gavin (Roby Attal), their supportive sidekicks Brooke (Reign Edwards) and Quinn (Christian James), and classic douchey pair Taylor (Bex Taylor-Klaus) and Asher (Matt Mercurio). If these guys are cardboard characters, they are on their way to the recycling centre.

While Natalie and Gavin’s aw-shucks romance is grating and unbelievable, it is really Taylor and Asher that takes the cheesy taunts and performance to this film’s flatline. Wiggly fingers and all. Are we watching Goosebumps here? And the corny lines are the real shocker here. “Are you ready to go to hell?” Really? I can imagine director Gregory Plotkin to possible dig himself a story that this is a tribute or nod to classics, but his lack of skills is showing up clearly here.

The premise itself is not the most original, but a slasher taking place in a Halloween horror carnival can still be a treat. In this case, a mysterious man who trudges about in heavy boots turns the fairground into hunting ground, and takes down teens amidst the fake bloody revelry going on. And of course, this year, he takes interest in our six. 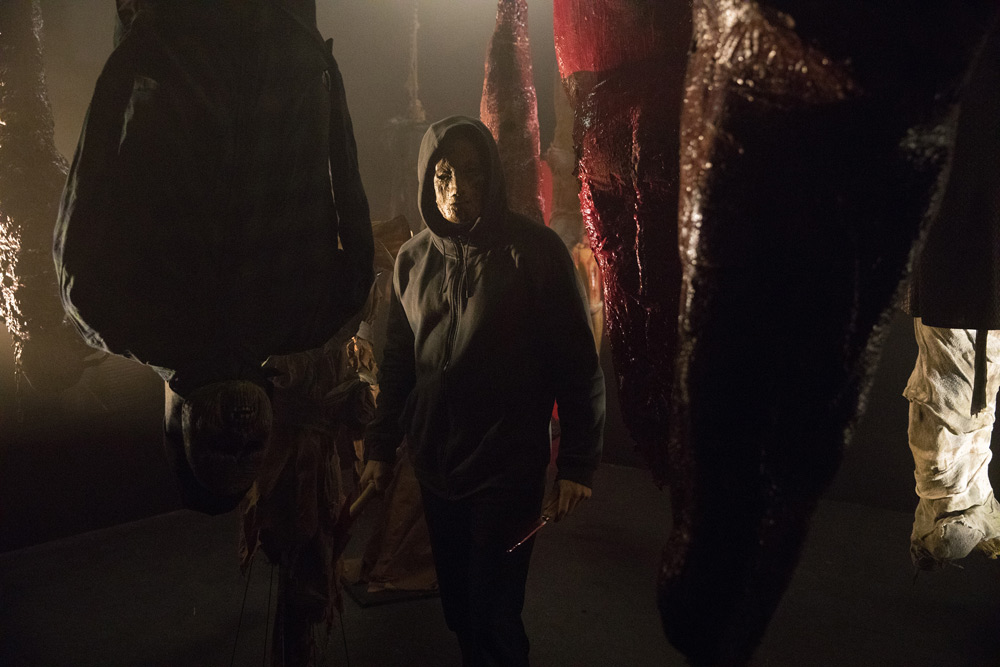 But Plotkin is a one-trick pony, and his scares all come from the haunted attractions themselves, more so than the killer himself. Again, with a creepy mask, heavy trod and seemingly large frame, he recalls Myers as a distant inspiration with his sudden appearances and silent fixation. He is almost never intimidating, and his kills land sharply in the B-grade scale in terms of effect and erm, execution. Sorry.

And even past all of these boring folks running about the film, there’s still the problem of the scenarios themselves. As one of the most sought-after themed events, the characters tend to wander around in the attractions almost exclusively to themselves. This makes room for more scriptwriting flexibility, but at the price of believability. Yes, the characters now have more reason to interact with the sets and can’t ask for help readily, but the possible tension is lost when the world drops away once they step through the doors of a haunted house.

Not to mention, there’s a last bit which aims to weave a little extra confusion with other employees wearing similar masks and dressed in the same way (boots and all), but again, the convenience of this trope plus how the actors seemingly can identify the actual killer (without looking at his “telltale” difference) makes Hell Fest dead-on-arrival.

There seems to be a hint of a sequel from the ending, but I hope this lazy film never revives.

A potentially fun slasher romp never musters enough scares, gore or tension to land an impact. Luckily we will always have Michael.