Horror films. We walk in knowing what to expect. Jump scares, horrifying ghouls, the occasional blood or gore, creepy sets, all shrouded in dim lighting and anticipatory soundtrack.

And Danur 2: Maddah checks these boxes, if almost a little too hastily.

Amidst all the frantic action in the film, it seems that Director Awi Suryadi focused too much on recreating successful tropes in other commercial blockbusters (The Conjuring, Insidious), and forgot to give his attention to two major elements – story and lighting. 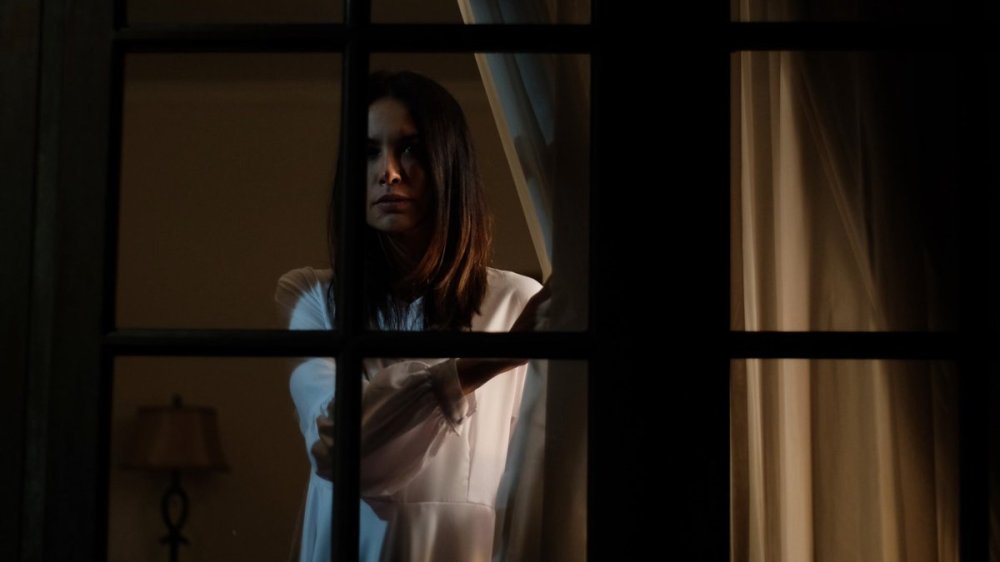 We pick up from the original Danur and see Risa (Prilly Latuconsina), with 3 befriended spirit friends. Since she couldn’t control her powers to ignore the ghostly realm, she decided to work with them. Those that want to anyway.

She’s told to go visit her relatives who have just moved to Bandung, along with sister Riri (Sandrine Michelle), because her mother has to go abroad with her father. All is well, until her uncle Om Ahmad (Bucek) decides to explore an abandoned pavilion-house next to their new home, and starts acting weird. And by weird, I really mean, walking around like a zombie. Like, all the time. It’s almost funny. Just insert the right soundtrack.

Suryadi’s hold on his story flies away in the face of showcasing his finesse in recreating horror formulas from the popular franchises. It barely follows through on any of the story threads, and feels more like a collection of jump scare opportunities that share a theme.

This is unfortunate because this can be a good (if a little expected) script, playing with a family seer that solves a relative’s home mystery. But instead, we get scenes that don’t complete their run, stacked against each other, making the audience uninvested in increasingly mediocre episodes.

There’s a lot to suggest topics like a possible love affair from uncle Om Ahmad, Risa’s struggle with her own gift, the family’s breakdown, can be compelling to watch and overcome. But the scenes devoted to these are spaced out, thin and often disrupted with unnecessary scares, almost like the director needs us to not forget it’s a horror film we’re watching. It’s the celluloid equivalent of a haunted house ride.

And when the mystery is revealed at the end, you are also left wondering why the ghosts behaved the way they did, because their motivations don’t make an ounce of sense – this realm or theirs.

And then there’s the lighting. Someone really needs a new job.

There’s atmospheric dark, and then, there’s just dark. Photographers will know that when film gets underexposed or overexposed, there’s no saving the picture, because those areas lack information, and no amount of tweaking in post-production will draw out anything.

It’s the same with Danur 2. I’m surprised the film made it to distribution with no one bringing it up. The lighting here is pretty basic. Like, we don’t hav enough power points kinda basic. Many a times, it looks like only prop lighting was used to illuminate the scenes, leaving most of the shot in darkness.

Filmmakers should know that even when portraying dark areas, there needs to still be information. A lot of scenes become disembodied, putting us out of context. I frequently have trouble figuring out where the characters are, because the settings are too similar, and there’s no visible identifiers.

This is a pity, because Suryadi’s camera work seems relatively inventive, featuring even a nice long one-shot scene at the start to establish the characters and the house. But no amount of interesting angles and visual storytelling can work, if we can barely see what’s happening.

With enjoyable performances from Latuconsina, as well as cousin Angki (Shawn Adrian) and aunt (Tenta Tina (Sophia Latjuba), Danur 2: Maddah is a prime example of a missed opportunity.

A theme park horror house ride with plenty of formulaic scares (some successful) but mostly too focused on its tropes to actually have a good story. That is when you can see anything at all.