If Singapore had a national dish, many would contend for a spot. But as with many origin stories, other countries might beg to differ. Try as we might, it’s difficult to clarify who exactly invented a dish.

While the rest might be a little shady, one snack has been quietly steaming in the background, secure in its beginnings. Its humble rice flour fragrance comes in a floral shape, sitting pretty on a green pandan square, holding sweetness in the form of either coconut or peanuts in its belly. We’re talking about – the Tutu Kueh.

When asked, many thought that this was a creation from some provincial village in China, or from a neighbouring Malaysian state, but the truth is this kueh, as one motto would say, is uniquely Singapore.

Kerwyn Chng from Queensway Lau Tan Tutu Kueh, is a third-generation owner of this comfort snack business. A former chef at the Fullerton, he met up with limited career progression, and when asked by his mum, took over as business developer of this family business six years ago. 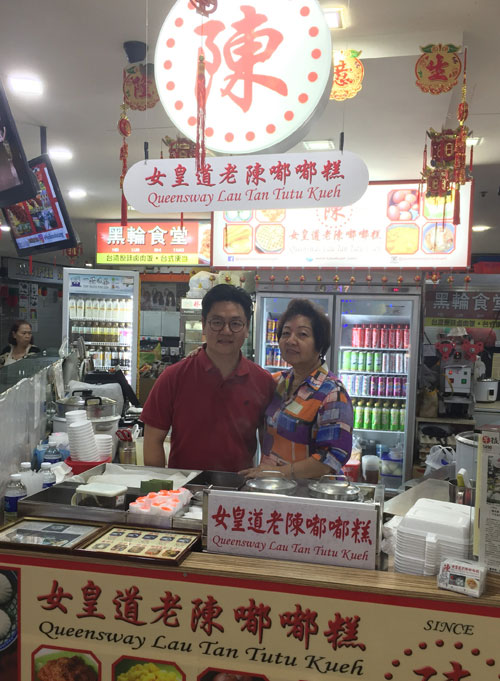 The story goes that when Kerwin’s grandfather came over to Singapore, he started as a barber. But he soon found footing in the food business, when a group of individuals from the same village as he, all with the surname Tan, came together to invent the special kueh.

Taking inspiration from the Malay Putu Piring and the Indian Putu Mayam, the Tutu Kueh finishes the local racial marriage with Chinese rice flour. The difference from standard rice flour, is that their rice flour is pounded, not ground.

“In the old days, we used a wooden board on a pivot like a seesaw,“ Kerwyn describes. “Attached to one end was a heavy rock, and the women would step on the other end to land blows on the rice while the men went out peddling the kueh.” This arduous task meant that one day’s work from one lady, would only result in one or two kilograms worth, ironically making the flour more costly than its filling.

There was no compromise to the texture achieved by this method and so the tradition from 1949 continues to this day by Queensway Lau Tan Tutu Kueh. Machines might have replaced the the literal legwork, but manual sifting is still done, both at the factory and on-site where the kuehs are prepared. This dedication to a heritage recipe is what marks this brand apart from the many other replicas in the market.

Another thing that remains unchanged, is the steamer.

“Over the years, we’ve experimented with a few other designs, but we found that this still worked the best,” admits Kerwyn. “The steamer keeps the precise pressure needed to prevent clumpy or crumbly skin.”

This speaks highly of well-researched cultural devices and methods that our forefathers devote their lives to, that withstands the test of time and technological innovation. Words like “artisanal” and “craftsman” may be profuse these days, but these examples from Singapore’s history truly embodies these trending words.

Although the snack once came in two sizes, the large one was soon phased out because of how long it took to prepare at the kiosk. The smaller sizes soon became the default, and Kerwyn presents me with pre-war moulds that have shifted slightly in design, with one even having a coin in the middle, but maintained its size.

Moving forward, Kerwyn is optimistic that the Tutu Kueh will always have a place in local cuisine. Even though regulars can easily differentiate them based on their ingredient (the rustic brown coconut shreds instead of the vibrant red), he has branded themselves with a logo, putting emphasis on his family’s food history with videos and memorabilia from the past showcased at his shops.

His branches in Queensway, Ion, Chinatown and Bedok have been seeing a revival and he’s glad that people are once again identifying with our local traditional snack. He feels that during SG50, the awareness grew, and beyond the designer items like erasers and notepads which replicate the iconic motif of the kueh, people are once again craving for that home-grown taste.

But he also realises that the new age of social media means that sometimes, novelty plays a part in developing new interest. Because of this, he has introduced chocolate and red bean fillings to his menu, both of which are being taken up by a younger crowd. Most recently, his Ion branch has also started the pink Tutu Kueh, a colour that has nostalgic links to other comfort food like the Png Kueh and Bandung drink.

Despite all the evolution, Kerwyn knows that it is important to hold fast to his food heritage, and will continue to maintain the integrity of this local invention, hopefully for many generations to come.