It’s a free day for me, as my companion headed for a half-day Golden Circle tour. I opted out as I wanted to explore the town a little more at a leisurely pace.

After processing some tax refunds at the nearby Tourist Office (location +2), I was now free to explore the town.

I decided to walk the streets of Laugavegur and Skolavordustigur for some not-so-last-minute shopping. As I stepped out of a souvenir shop along the harbour, I was greeted by the largest, most complete rainbow I’ve seen so far. Feverish clicks gave way to slight annoyance as I couldn’t capture the whole rainbow on my phone! #firstworldproblems

With that colourful morning greeting, I made my way to Cafe Loki, an eatery I noticed during my last stroll. Known for serving home-cooked Icelandic food, this unadventurous foodie braced himself, no thanks to what he’s heard when it comes to their “delicacies”.

Even though I decided against the notorious hákarl, another patron sitting across the room picked it for her lunch. How did I know? Let’s just say even 7 metres didn’t make a difference to my nose. The pong was telling.

My order came shortly after – two rye bread slices with mashed fish and smoke trout, with more rye flatbread accompanying sheep-head jelly, bean salad and mashed turnip. The trout and rye carbo, lovely. The rest, well… no Oliver Twist scenario here, thank you. But the view is great and the setting, homely and comfortable. I’ll recommend it, but maybe I’ll pick something else from the menu. 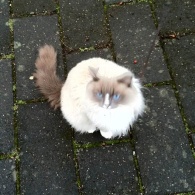 Some Icelandic folks have a habit of leashing their cats outside – an odd phenomena for me, but I got greeted affectionately by a gorgeous Persian cat as I was heading back. Because it was so friendly, I decided to play with it for a while. The fur was so soft and it mewed its need for attention. I had fun just trying to snap a pic of the naughty minx while trying to capture the colour of its beautiful blue eyes, reminiscent of the Lagoon. 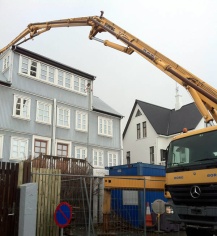 ned to the apartment, a new rainbow greeted me, this time a metallic version. A crane was arching over the roof to our backyard. I  later found out that my unit was actually fairly new, with some sibling units coming up behind soon to house more guests. Maybe it was for more of Bjork’s crew in the future, which the apartment just recently did before our arrival!

My first shop of note was Gjafirjardar, the only new age shop in Reykjavik. I struck a conversation with the proprietor and turns out that her husband visits Southeast Asia a lot. I passed her my card and invited her to look me up whenever she might wish to visit – a possibility only once her two girls are a little older.

After popping in and out of shops for my gift-hunting and completing most of my purchases, I decided to stop at a colourful cafe which reputedly had the best barista in town. Truno was a glittery, velvet boudoir of a set-up and I enjoyed my cappuccino in its cosy space as I flipped through some designer magazines. After thawing out nicely, I walked to the end of Laugavegur before turning back, picking up some chocolate donuts, Icelandic twisted donuts (Kleinur), and two macarons at a quaint bakery by the name of Sandholt.

I ended the evening with a trip to Osushi The Train, a sushi restaurant that used mainly local produce for their dishes. Though the variety was a little lacking, what little on offer was tasty. There was a version of tuna that included some paprika powder. The salmon, though not as sweet, had a nice firm, gelatinous texture. And yes, I had whale. It was not very exciting, like tuna really.

Bringing the plates to the cashier was amusing, as was the tentative query of the cashier as to my enjoyment of the food. It seemed that they were eager for an Oriental validation maybe? I’m no Japanese but I gave her my approval anyway and concluded my just-another-day program.