Yoshiyuki Suzuki (Fumiyo Kohinata) returns home after a day’s work at the office. His wife Mitsue (Eri Fukatsu) struggles to fillet a fish, while teenage daughter Yui (Wakan Aoi) princesses about the “gross” produce from her grandfather Shigeomi Sasaki (Akira Emoto). His son Kenji (Yuki Izumisawa) returns home and heads straight to the room, ignoring his parents and their instructions.

So in short, the Suzuki family is your average modern-day Japanese household.

But when they wake up the next morning to find all their electronic devices fried, they believe that only an extensive blackout has occurred. Along with clueless neighbours, they suffer the inconveniences through the day, and grumpily head to bed with bellies full from a portable stove-top dinner.

As days pass, and with no updates on the happenings, hindrance turns into panic and fear. Vendors start raising prices for produce. Bicycles start selling out. The Suzuki family, along with the other townsfolk, soon realise their city lifestyle has put them at a disadvantage in this power apocalypse. 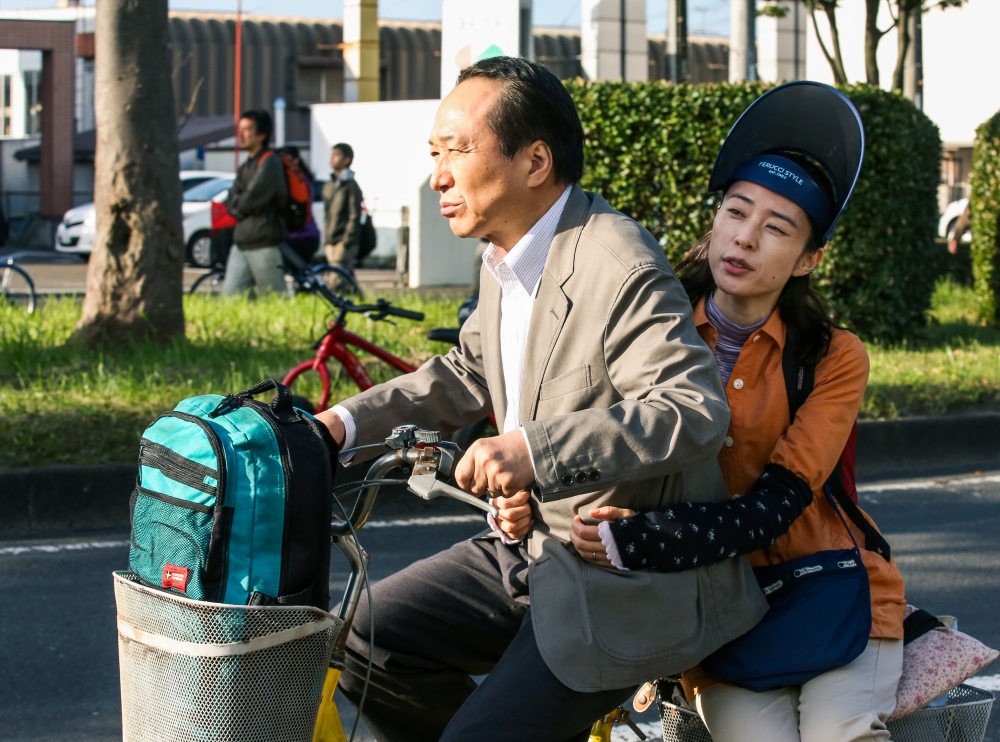 With no official solution in sight, Yoshiyuki makes a call to gather the last of their resources, and the whole family starts an almost-thousand-kilometres pedal to Kagoshima, where their fisherman grandfather resides. The dad bulldozes his decision amidst complaints from his children, in hopes that the countryside-bred elderly, might have the skills to help them survive the event.

In doomsday scenarios like these, many directors have amped up the scale with sweeping mob scenes and destructive chaos. Yaguchi has taken the more sensitive route, crafting an intimate story of an urban family rediscovering their bonds.

At the festival opening interview, the mild-mannered director highlighted his mission to tell stories that appeal to him, and not necessarily what the current trends dictate. Survival Family’s unpretentious tale attests to the quiet observations that comes from an astute writer, who prefers the intimate experiences for their more sincere effect.

Given how he also admits to his tendency of avoiding CGI, it’s incredible to see the dystopian state of Japan rendered by fantastic production design. Added to cinematographer’s Yoshiyuki Suzuki documentary-style approach, the film feels realistic and relatable.

Like his other hits Swing Girls and Waterboys, Yaguchi manifests his characters through the little actions and decisions they do. As much as there are hilarious physical humour, such as the father’s unfortunate bowel consequence from drinking unclean river water, there is also much joy in familiarity when seeing how petty the family can get.

In a scene where the Suzukis meet another family, the Saitos, on the road, Yoshiyuki begrudgingly accepts their help, losing pack leader status to the more knowledgeable and resourceful family.

Half the fun in this film is exploring the options of how we can deal with a world without electricity. If you wonder why the blind might benefit from this scenario, you’ll have to watch the film to find out.

But the other has to be the tender moments that the director has punctuated the domestic comedy with. 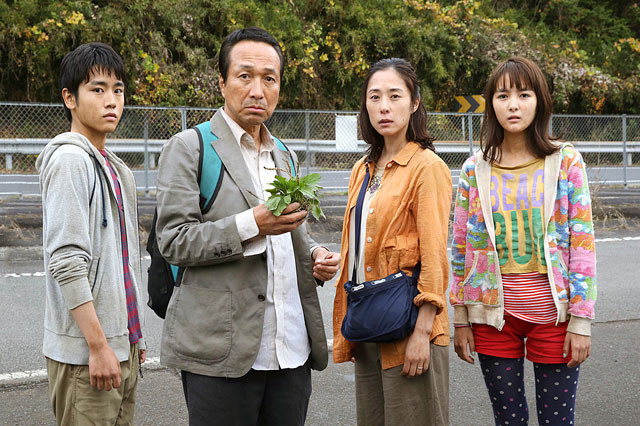 Close to starvation, the family comes across a pig and slaughters it, incurring the wrath of the owner Zennichi (Yasuo Daichi). The farmer chooses instead to offer them roof and food, in exchange for help around the house. That episode leaves an indelible mark on both parties when they leave. At the dinner table, as they chew on their smoked meat, Yui tears up and a concerned Kenji asks her the reason.

“I don’t know,” she honestly sobs.

It’s scenes like these that showcases Yaguchi’s finesse in understanding the complexity of human psychology, and they are a joy to watch.

Survival Family is a rare combination of casual commentary with cutting discoveries, as well as a reflection on human relationships in our digitally-hooked up age. It keeps the heavy topics afloat with head above the water, by sprinkling chuckles non-stop. This family more than survives.

The 2018 Japanese Film Festival (Singapore) is happening from 2 – 18 March at the National Museum, Singapore.

Tickets and film details are available now at:
https://japanese-film-festival-singapore.myshopify.com/