There are antique timepieces beside mobile chargers and colourful plastic jewellery. A Barbie sits patiently, her dress a little weathered but still pretty. Underneath a table, an old photo of a man in his youthful glory is captured with an auric glow.

These remnants of the past may seem useless, but new owners can be found at Sungei Road Market – also frequently named Thieves’ Market for its origins.

Forgotten but functional, Singapore’s oldest flea mart is all about second chances. 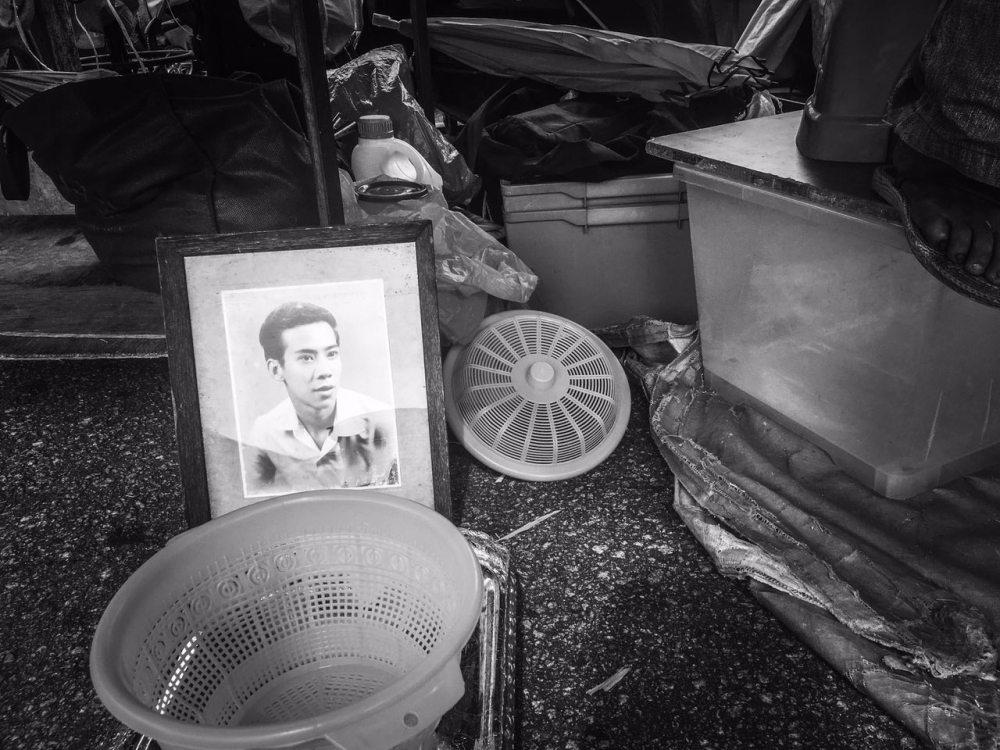 The Sungei Road Market knows a thing or two about chances, having escaped several clean-ups and relocation since its beginnings in the 1930s.

But come 2017, when the new Sungei Road MRT station is finished, the agencies have decided to finally close the chapter on this 80-year-old peddling phenomena.

Even now, as the aged hawkers display their collection of bric-a-brac on the tarmac, small cranes trundle behind them separated only by a thin sheet of metal, like a metallic dinosaur slowly clearing out the living ones. 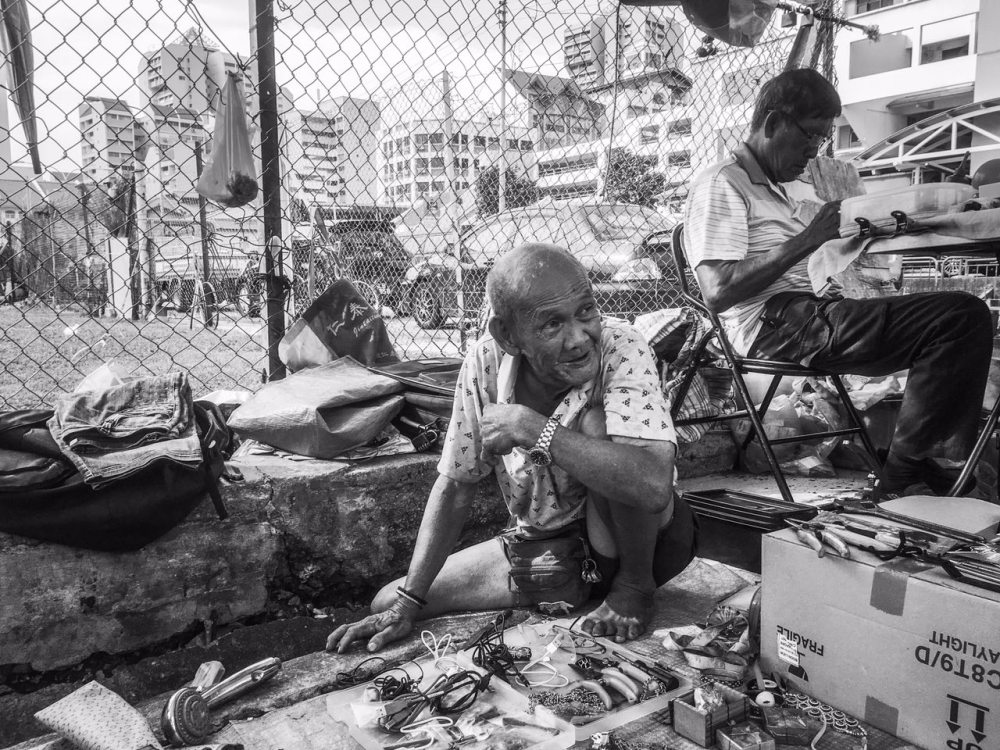 Stepping into the off-roads of Pasar Lane, Larut Road and Pitt Street today, the market still has a vibrant, if piratical air about it.

Flapping canvas, cardboard dividers – as makeshift as it is, there is a system here. A representative goes around marking attendance everyday and ensures fair play.

As the only location in Singapore where sellers are not required to pay rent or be licensed, the condition of selling only old items is strictly enforced by daily patrols from National Environment Agency (NEA) wardens – a sight to see with their neon yellow vests. 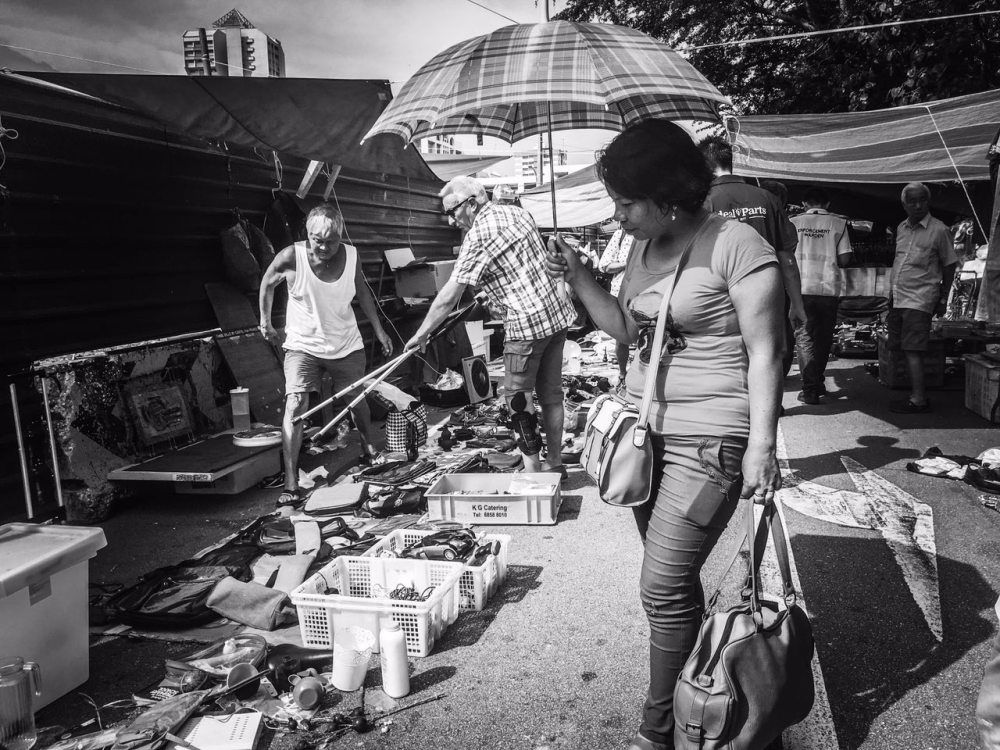 The spirit of recycling is a fact of life here.

Pre-loved objects from our modern-day throwaway culture are displayed like an unconscious, macabre art installation. These discarded items from another life are lovingly laid out – neatly and with purpose. 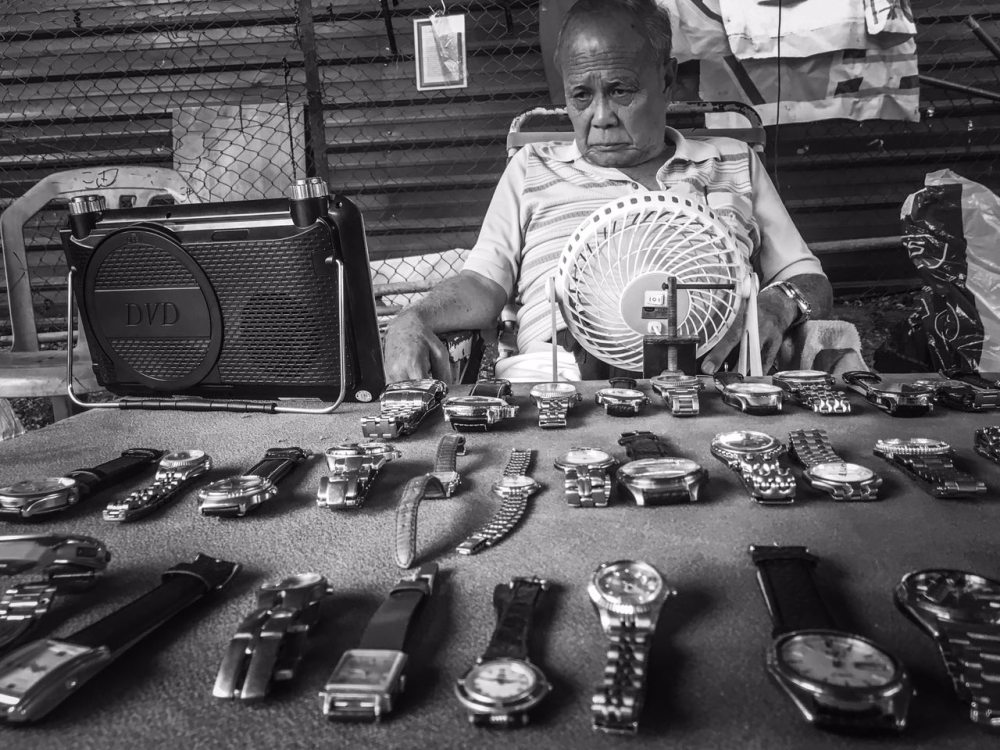 The traders, mostly male in their 50s to 80s, are walking symbols of resilience and independence.

But how much of David remains to fight the bulldozing Goliath?

At the main junction, Linda sits, perched upon short stool and Ikea box. Like a mother hen, she watches over brood and traffic both, with shining eyes.

“I used to work for a cinema and my sis here was a hotel receptionist,” she shares. “But when they kept reassigning us and wanted to train us with electronic stuff, we decided to come out and sell things instead.” 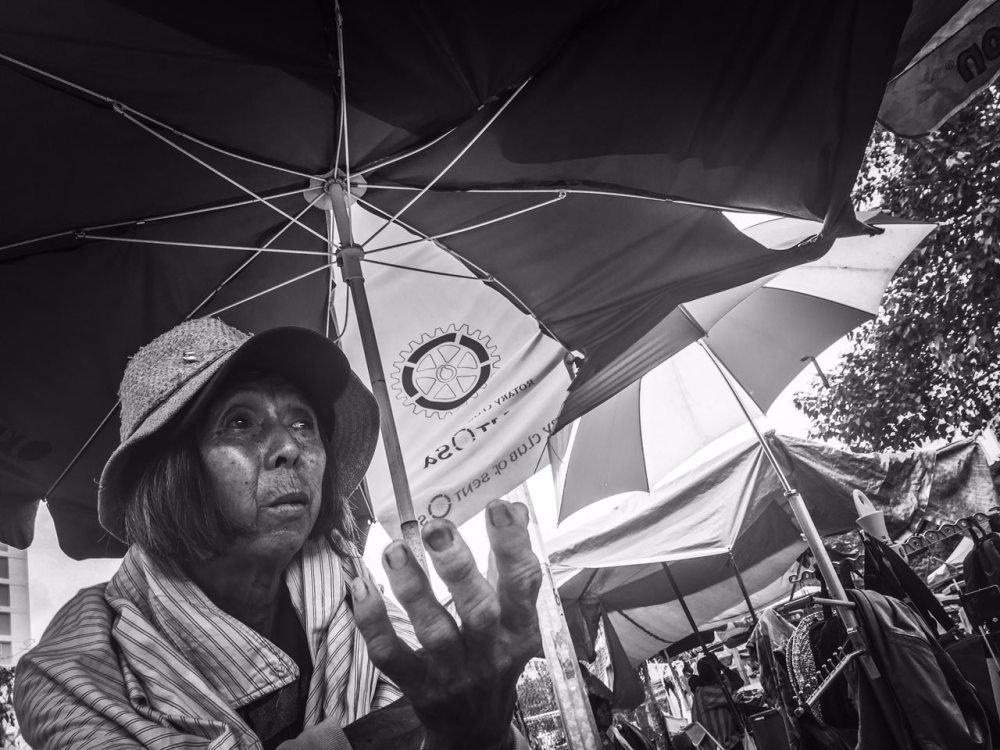 Having been here for over 20 years, Linda seems resigned to the fact that her time at the market is almost up.

“We’ve got no license, so we’ve got no choice. Do you know how much it is to rent a shop these days? Thousands! How much can we get from these?”

She points to her PVC wallets and second-hand books. Her wares are handed down through friends, with occasional purchases when she feels the item is of particular value, but one can clearly see that daily takings will be limited.

What will she do after the market is closed for good? “I guess I’ll take a break, maybe a holiday,” she sighs.

“I’ll see what comes after.”

Even though he was sorting out ornamental jewellery in the bright sun, Mr Hafiz quickly pulled out a stool for me to sit on, underneath the only small spot of shade he had.

His calm yet firm demeanor is a sign of his experience at the market for over 10 years. 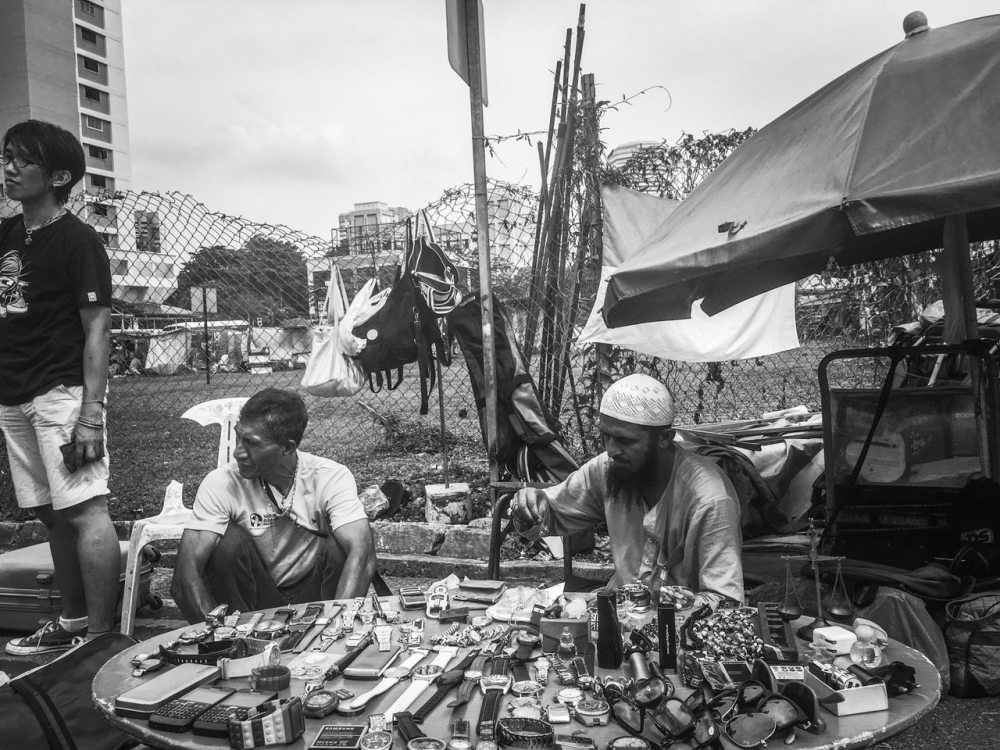 His story began at a bin centre, when certain items being thrown by his Bangladeshi friend caught his eye. “He told me to take them but I told him I’ll pay for them, no matter how small a token,” he recollects.

“And that’s how I started. Now I sell watches, iPhone items, accessories, whatever I see that is of value.”

And with that he turns and offers $20 for a bunch of jade bangles someone brings to trade.

Although his friends by the side were eager to request for aid from government agencies to relocate them, Mr Hafiz reassures them with an old-world air, saying, “I don’t worry. We can always find a job. This is Singapore,”

He goes back to sorting out his web of tangled costume jewellery.

“You must remember to put in the hundred and eight good men! No one writes about us anymore!” Mr Li gets visibly animated when talking about his history. 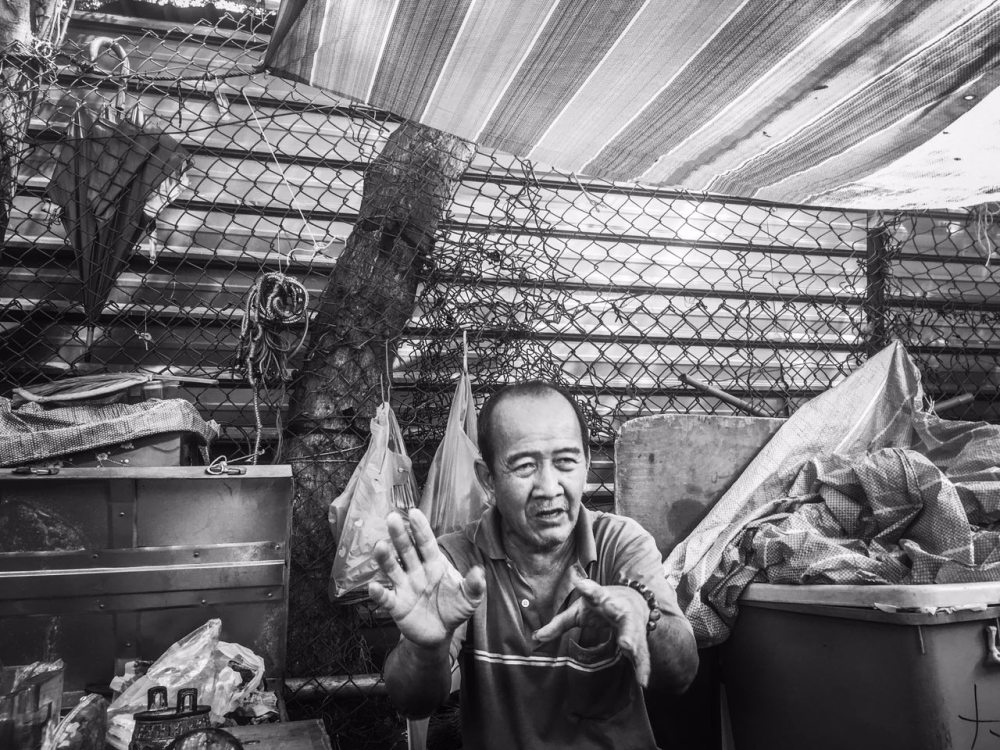 Speaking about a collective letter which saw a hundred and eight signatures of old vendors, Mr Li enthuses how their move may have saved the flea mart from extinction at one point.

“We sent the letter to Lee Kuan Yew, Goh Chok Tong, and all the other ministers.”

“Eventually they let us continue. Even the good Mr. Lee admitted that markets like ours are found all around the world, to great popularity, so why not here?”

And indeed, why not?

Sungei Road Market is a heritage piece that is a cultural organism in itself. But like many others, it will be razed in the name of redevelopment. 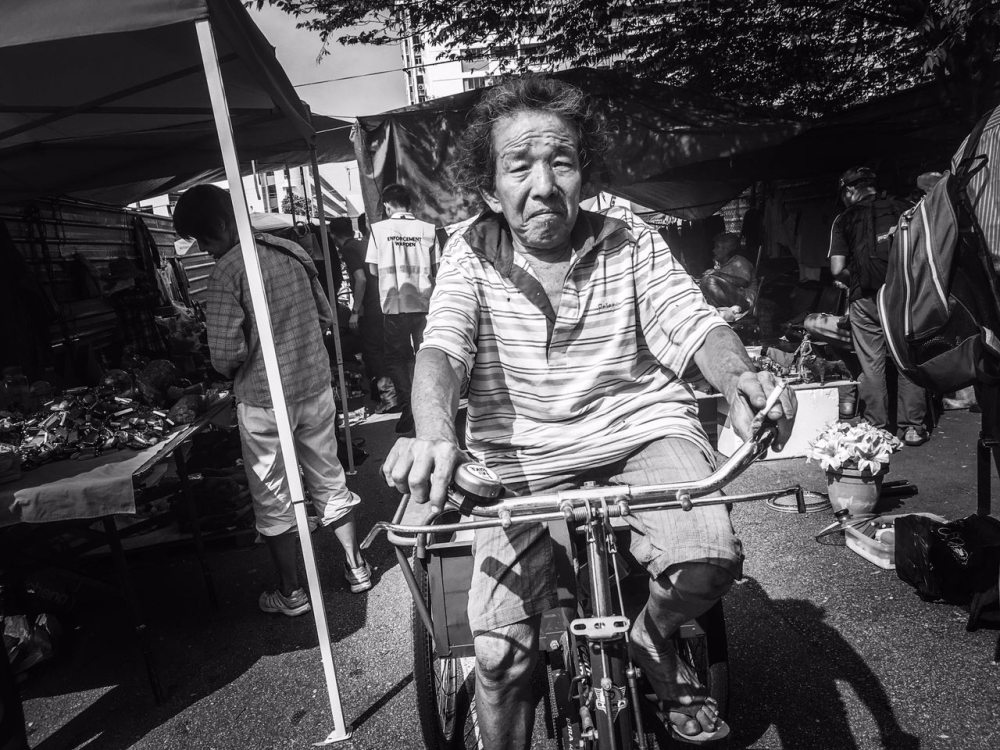 The NEA and Urban Redevelopment Authority (URA) have been largely silent about this, even when approached by the market’s representative and president of the Association for the Recycling of Second Hand Goods, Mr Koh Ah Koon, with regards to relocation suggestions.

There are plans to introduce some vendors to vocational training, and others are offered a hawker stall to sell food, but the suggestions seem disjointed with the needs and nature of the flea market. 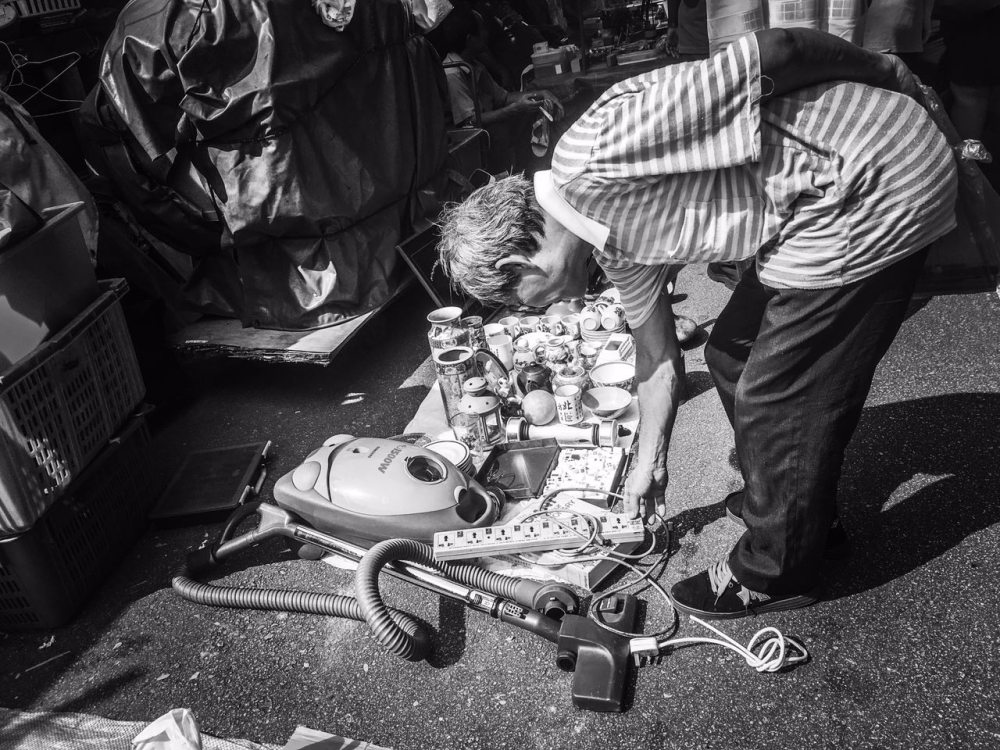 Mr Koh shares, ”The government speaks about taking care of the Pioneer Generation, and yet we seem to be discriminated (against).”

As he talks about his efforts to help his friends, he mentions his ignored efforts. “We just want to have a space to hawk our wares. We don’t need handouts. We have abided by the rules of the government so far and have always listened to their suggestions. Why can’t they spare even a little time to listen to ours?”

“You know, one little known fact – late Mr Lee Kuan Yew didn’t have a lot of money when he first won his election,” Mr Koh recalls. “He came to Sungei Road to buy his typewriter for his first office. Isn’t this a piece of history we shouldn’t be so quick to erase?

“Don’t we count for something?” 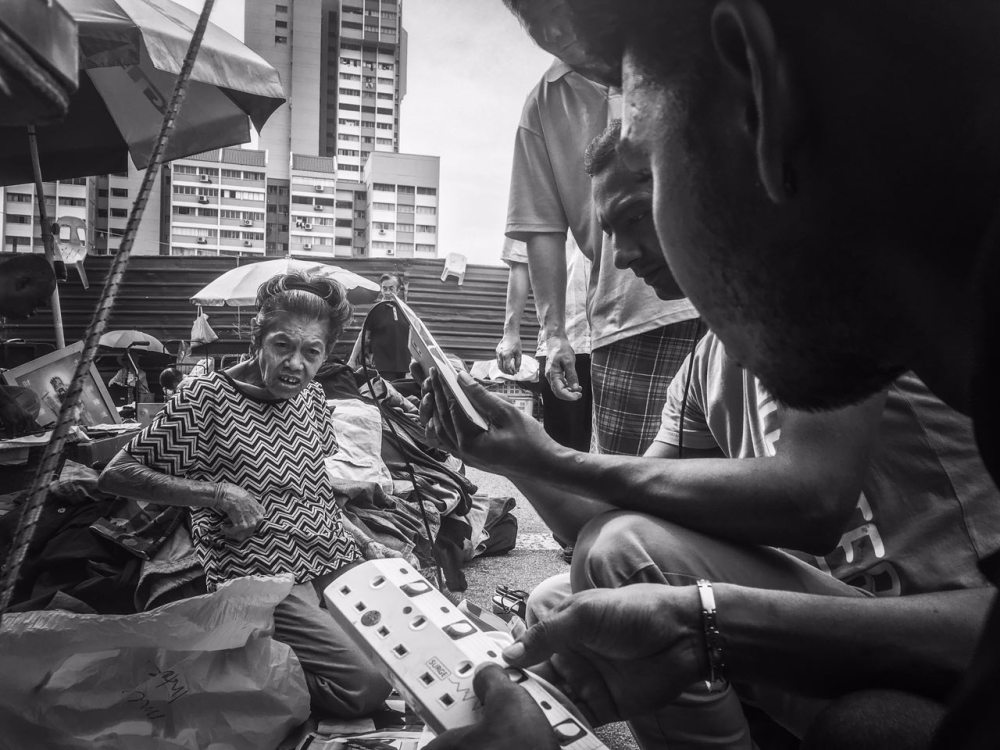 This dissolution will be felt:

By the gleeful uncle that is lugging home his purchase of a ceramic pot.

By the Indian vendor that bargains in perfect Hokkien to his customer.

By the peddler that wolfs down his frugal lunch of white rice, brinjal, tofu and bean sprouts.

By the many people who have made Sungei Road their second home and meeting place for friends and thrifty purveyors.

The Sungei Road Market is as much anthem as it is entity – if you look a little closer, a treasure is actually lying out in the open.